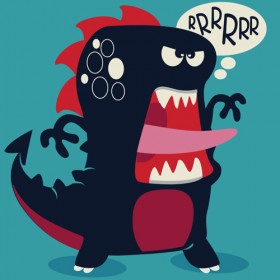 Recently, a friend of mine burst out that he thought social media is better suited to video links.

I asked him why, and he replied that his reasoning was simple: because social media is ‘visual’ (that old chestnut) so people are more likely to watch content that is also ‘visual’.

I said that, in my opinion, audio content is just as, if not more effective than video content.

My answer went straight to the very core of what makes great audio so….well, great!

Here’s why:  the best kind of audio has always been the ‘theatre of the mind’ – you know, pictures in your mind generated by sound effects, voices and music - as opposed to pictures that are already there.

Here’s an example: if you spend a lot of time driving as I do, then you’ll know that helpless feeling that comes with the realisation that too many hours of your life tick by as you sit behind mud-spattered lorries that are stuck in one life’s long and winding traffic jams.

Often you might imagine the sudden invention of an in-car time machine (right next to the coffee mug holder) that could transport you several hours into the future so you can be fast-forwarded home to play with/yell at the kids.

Yet, every so often, the same journey and the same traffic jam can fly by, mostly it’s when you’re distracted. That’s where audio via social media comes in. It’s a time machine. Last week a friend of mine posted a BBC science podcast on his Facebook page (brilliant teaser heading: Dinosaurs sex life revealed). So I clicked on the link and I was instantly transported off the motorway as a great voice told me that dinosaurs were often monogamous and stayed together for life (no Jurassic pre-nupts needed). Absorbing, well written, great sfx (roar/jungle/huge footsteps/dinosaur lovin’) and wonderful music – all combined to transport me off the motorway and the damned traffic. Suddenly and mysteriously I found myself at my destination.

I looked at my watch and realised I’d been on ‘remote control’ for 45 minutes. In fact, the podcast was still going when I parked up and so absorbed was I in the narrative and world the audio created, that I found myself sitting in the car wanting to hear the remainder of the 50 shades of Tyranno-grey!

So, my point to my friend was that good audio is perfectly suited to social media. Perfect for driving (and Sunday morning lie-ins). In fact, its invasive. It gets to the places and instances where ‘visual’ links via social media can’t.

I guess the question is, how do you get great audio onto social media?

I’ve found that audioboo.fm is easy as hell.

It allows smartphone and website users to record, upload and playback digital audio recordings, which can be then listened to on the Audioboo website, listened via the apps, embedded in a user's own website, Twitter, Facebook or Tumblr feed, and submitted to ITunes as a podcast feed. Image, location, title, description, category and tags can be enclosed with any uploaded clip.

copyblogger.com is another great example of where audio powerful, each week they post an audio blog to their members... a Blogcast!

But remember – if you want to engage your listener – make sure its as good as dinosaur sex?

Oh, by that way, did I mention that Clearwave makes stunning audio for podcasts, radio commercials and websites? checkout what we do clearwaveproductions.co.uk/services

Because if you didn’t know, we do…

Lastly, recent evidence suggests that Tyrannosuarus Rex may have been covered in brightly covered feathers to attract members of the opposite sex.

There’s some theatre of the mind right there.

Hear your brand in music.